what are you currently reading and is it moving you ?
I’m reading The Hate U Give by Angie Thomas and imagining all the scenes in my head and I’m so happy about the increase in diversity in the book world.

I mean, growing up, I read alot of books but I’m sure if I kept a list of them, I can probably count how many had a POC or diverse main characters or relatable social stories.

So, here is to more positivity and acknowledging that the world is full of different people who will like to be represented 🖐🏾🖐🏼

I got to complete a whole book in January even though January felt like forever. That one book was important to me to complete because I’m trying to find a way to keep my hobbies (reading, filming, blogging & making wigs) and succeed in PA school.

If you’ve been following my blog or Instagram or Youtube, you’ll know that PA school is really really hard & time comsuming. I almost want to stop blogging but then, that thought makes me really sad. So, I will keeping trying to balance both since they’re a part of me.

Here, I have my very small February TBR list:

2. Year of Yes by Shonda Rhimes

3. There’s Someone Inside Your House by Stephanie Perkins

Have you read any of this ? And what books are you reading this month?

January 12, 2017 ~ Booky's Blog ~ 1 Comment
Hey readers, Happy New Year !!!
Here is my first post for the new year and I’m ready to take 2017 on! Who else is ready??
Right now in my life, I’m in that weird phase of being a new adult and “adulting”. Too young to have all my shit in order but also too old not to have an idea of what I’m doing. I’m constantly worried that I’m missing a step in a direction or not doing enough. For these reasons, I researched some books that are not my usual reads, and found that Swing Time discussed issues similar to some of my current struggles.

One particular review from Peguin Random House website stuck with me when I asked my BFF to get me the book as a Xmas gift. Annalisa Quinn, NPR.org wrote “Brilliant…With Swing Time, Zadie Smith identifies the impossible contradiction all adults are asked to maintain — be true to yourself, and still contain multitudes; be proud of your heritage, but don’t be defined by it. She frays the cords that keep us tied to our ideas of who we are, to our careful self-mythologies. Some writers name, organsynopsis  contain; Smith lets contradictions bloom, in all their frightening, uneasy splendor.”

Here is a quick synopsis:

“Two brown girls dream of being dancers—but only one, Tracey, has talent. The other has ideas: about rhythm and time, about black bodies and black music, what constitutes a tribe, or makes a person truly free. It’s a close but complicated childhood friendship that ends abruptly in their early twenties, never to be revisited, but never quite forgotten, either.

Tracey makes it to the chorus line but struggles with adult life, while her friend leaves the old neighborhood behind, traveling the world as an assistant to a famous singer, Aimee, observing close up how the one percent live.
But when Aimee develops grand philanthropic ambitions, the story moves from London to West Africa, where diaspora tourists travel back in time to find their roots, young men risk their lives to escape into a different future, the women dance just like Tracey—the same twists, the same shakes—and the origins of a profound inequality are not a matter of distant history, but a present dance to the music of Time” – Penguin Random House.

Does it sound like something you’d read? And what other books are you reading??

I read three books in total for October so I thought why not aim for three books this month? I know I can atleast finish them **fingers crossed**

The three books with that honor are:

The Statistical Possibility of Love at First Sight by Jennifer E Smith. “Quirks of timing play out in this romantic and cinematic novel about family connections, second chances, and first loves” -Google Books

We Need New Names by NoViolet Bulawayo “We Need New Names tells of the life of a young girl named Darling, first as a 10-year-old in Zimbabwe navigating a world of chaos and degradation with her friends, and later as a teenager in the Midwest United States, where a better future seems about to unfold when she goes to join an aunt working there”- Wikipedia

Let The  Sky Fall by Shannon Messenger “Seventeen-year-old Vane Weston has no idea how he survived the category five tornado that killed his parents. And he has no idea if the beautiful, dark-haired girl who’s swept through his dreams every night since the storm is real. But he hopes she is.
Seventeen-year-old Audra is a sylph, an air elemental. She walks on the wind, can translate its alluring songs, and can even coax it into a weapon with a simple string of commands. She’s also a guardian—Vane’s guardian—and has sworn an oath to protect Vane at all costs. Even if it means sacrificing her own life. When a hasty mistake reveals their location to the enemy who murdered both of their families, Audra’s forced to help Vane remember who he is. He has a power to claim—the secret language of the West Wind, which only he can understand. But unlocking his heritage will also unlock the memory Audra needs him to forget. And as the storm bears down on them, she starts to realize the greatest danger might not be the warriors coming to destroy them—but the forbidden romance that’s grown between them” – Google Books

What books are you currently reading?

Leave your comments below 👇

Emem Uko sent this beauty to me!  Hers to Tell and I can’t wait to read it. Suspense overload🔪.

Synopsis : “Born with OCA1b, Cara Ella Smith couldn’t be more different from her sisters. The need to move far away from family lands her in Miami, where she becomes a writer. Her first novel indirectly aids Detective Abram Jonah in the arrest of a vile human being, and she becomes a target as a result. On the day of her 8th book signing event, she is almost run down by a vehicle, which she narrowly avoids because she is pulled away from the road by a dashing hunk, Jet Meyer. There is a nagging fear that tugs at her. Jet is hiding something. He skillfully evades personal questions that Cara asks him. Cara is plagued with anxiety and nightmares from her near-death experience, but deep down, she knows that her distress has more to do with Jet than the incident.”

I’ll be posting up a review at a later date.

I’m starting my October Tbr list and the first book will be Through To You by Lauren Barnholdt.

Here is an synopsis from Simon and Schuster website.

“It starts with a scribbled note in class: I like your sparkle. Harper had casually threaded a piece of blue and silver tinsel through her ponytail in honor of school spirit day. And that carefree, corny gesture is what grabs Penn Mattingly’s eye. Penn—resident heartbreaker of the senior class. Reliably unreliable. Trouble with a capital “T.” And okay,smolderingly sexy.

Harper’s surprised by Penn’s attention—and so is Penn. The last thing he needs is a girlfriend. Or even a friend-with-benefits. The note is not supposed to lead to anything.

Oh, but it does. They hang out. They have fun. They talk. They make out. And after a while, it seems like they just click. But Penn and Harper have very different ideas about what relationships look like, in no small part because of their very different family backgrounds. Of course they could talk about these differences—if Penn knew how to talk about his feelings.

Harper and Penn understand their attraction is illogical, yet something keeps pulling them together. It’s like a crazy roller coaster—exhilarating,terrifying, and amazing all at once. And neither knows how to stop the ride…”

Can’t wait to dig in!

I’m going on a Mini Vacay tomorrow and super excited! I’ll share the books I’ll be bringing along tomorrow!

Summer is coming to an end very soon 😢😭 but that means Fall will be here soon 😊😍. Fall is my favorite season especially since it coincide with my Birthday. What’s your fav season?

I have my September TBR list and let me tell you, its quite ambitious. The readings are not difficult but I will also have my school work load with it, so wish me luck guys! But I think I can do it.

2. When by Victoria Laurie

3. The Last Time We Were Us by Leah Konen

5. Everyday Is For The Thief by Teju Cole

7. Through To You by Lauren Barnholdt

What are you reading this month? See any you’ve read or would like to read?

Hey guys, I have this new book from Sam Reed, Fair To Hope that I received from the author! It’s release date is August 30th and I’d be writing a review once I’ve finished it. The book is an exchange for an unbiased review.

Its a fantasy YA book about a young girl named Velma. She had a tough upbringing through the foster care and another in a secret order. She was chosen as Kachina along side her best friend who she will have to kill to save the world in the last battle. She runs out of time and must decide what fate to chose from, save the world that have always been difficult or bring it down?

I can’t wait to dive in and see what Velma and Josh is all about!

It Ends with Us by Colleen Hoover.

I’ve been waiting for this book and so glad to have it. It will be part of my Aug TBR and can’t wait to review it. Such great reviews out already.

Keep a look out for update and my give away for back to school . 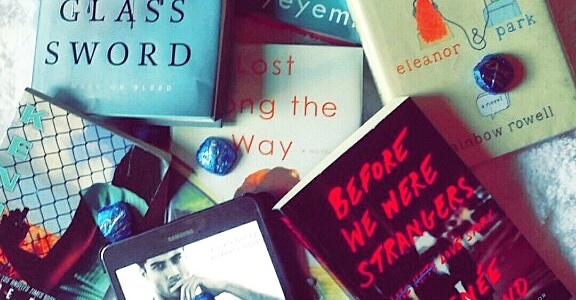 It’s first of August 2016! We’re over half of the year peoples! I’m grateful to be living, aren’t you as well?

Check out my Aug tbr. Its quite impressive cause the image doesn’t include the books I’ve yet to receive in the mail.

I’ll keep y’all posted of the books as they arrive.

See any you’ve read or want to read?